CopperFox Metals has the right to purchase 100% of the Eaglehead property. This is a non-arm's-length disposition of District Copper Corp.'s Eaglehead property for aggregate consideration of $1.2-million plus a reimbursement to the company of a reclamation bond in the amount of $212,000 pursuant to the terms of a property acquisition agreement dated Feb. 9, 2020, among the company, Northern Fox Copper Inc. (the purchaser) and Copper Fox Metals Inc., as guarantor and parent company of the purchaser. At the time of closing, the company has received $200,000 in aggregate ($50,000 deposit and $150,000 at closing) in respect of the $1.2-million sale price. The balance of the purchase payable by the purchaser to the company ($1-million) is secured and payable in three annual instalments of $340,000, $330,000 and $330,000, respectively, on each anniversary date following closing. In addition, the company has reserved a 0.5-per-cent net smelter return (NSR) royalty on future production, if any, from the Eaglehead property.District Copper, owns a 100% interest in the Eaglehead porphyry Cu-Mo-Au Project, located in the Liard Mining District approximately 60 kms east of Dease Lake in northern British Columbia.

The Eaglehead project consists of six mineral claims covering 15,956 ha and is in good standing until January 31, 2021. Individual portions of the property are subject to Net Smelter Royalties (“NSR”) as follows:

​First discovered in 1963, the project has since been the focus of numerous exploration programs completed by various companies.

The results of the RPA resource estimate are outlined below:

Notes: 1. CIM definitions were followed for Mineral Resources. 2. Mineral Resources were estimated using long-term metal prices of US$4.00/lb Cu, US$1,400/oz Au, and US$17.00/lb Mo, and a US$/CS$ exchange rate of 1.00. 3. The copper equivalence (CuEQ) calculation includes a provision for different metallurgical recoveries and a 2.5% Net Smelter Return royalty. 4. Minimum mining width was five metres. 5. Bulk density was 2.70 t/m3. 6. Numbers in the table may not add up exactly due to rounding.

Readers are cautioned that a considerable amount of work has been completed on the Bornite and East zones since the date of the RPA Technical Report, including: additional drilling, sampling, re-analysis of drill core and pulp samples, preliminary metallurgical test work, ground and airborne geophysical surveys and re-logging historical drill cores. The results of these activities have considerably increased the understanding on the controls of mineralization that could, in turn, significantly affect the results of the RPA 2012 Technical Report. In addition, the information and assumptions used in the 2012 Technical Report have changed since the date of the Technical Report. There is no assurance that the inferred resource and conclusions set out in the 2012 Technical Report will be realized. A qualified person has not done sufficient work to classify the historical estimate as current mineral resources and the issuer is not treating the historical estimate as a current mineral resource.

The historic resource estimate was carried out using a block model constrained by 3D wireframes of the principal mineralized domains. Grades for copper, molybdenum, and gold were interpolated into the blocks using Inverse Distance to the Third Power (ID3) weighting. Top cuts applied to the Eaglehead sample data prior to compositing were 7.5% Cu, 0.250% Mo, 50 g/t Ag, and 2.5 g/t Au. The block model utilized 10 m x 10 m x 5 m blocks.

Since 2014 District Copper has conducted exploration programs and worked on standardizing all exploration data from previous exploration programs. Ground and airborne geophysical surveys, limited diamond drilling, preliminary rock characterizations studies, re-logging of historical diamond drill core, sampling and re-sampling as well as a re-analytical program on all available sample pulps from the project have been completed.

The geological setting, alteration, and mineralization at the Eaglehead Project are consistent with a calc-alkalic porphyry copper-molybdenum system. Five zones of moderate to intense alteration and mineralization occur within a northwest trending corridor, primarily within biotite granodiorite. From southeast to northwest the zones are: East, Bornite, Pass, Camp, and West. Collectively, the zones cover a strike length of approximately 8 km and have been the subject of exploration since the discovery of the Camp zone in 1963.

The various mineralized zones exhibit alterations typical of a porphyry copper environments and ranges from potassic to phyllic to propylitic. Essentially similar alteration accompanies the mineralization in the Pass, Bornite and East zones.

Phyllic alteration (sericite-chlorite alteration) is characterized by a pale green silicified texture with prominent muscovite grains (altered biotite). Fractures within the phyllic alteration zone can contain chalcopyrite-bornite mineralization along with a combination of calcite, hematite, sericite, chlorite, and/or epidote and commonly at depth gypsum/anhydrite.

Propylitic alteration (pervasive epidote, epidote veinlets or epidote in veinlets with chlorite, hematite and pyrite) typically occurs over narrow intervals within zones of potassic and phyllic alteration. Weak to moderate concentrations of copper and molybdenum (from analytical results) do occur in propylitic-altered intervals in the Pass zone.

The main copper-bearing minerals are chalcopyrite and bornite, which occur primarily in sheet-like fractures, breccia, and fault zones, with lesser amounts occurring as disseminated grains and blebs in quartz stockworks. The gold and silver concentrations are associated with the copper minerals. Copper grade is typically a function of fracture density. Late-mineral fault and breccia zones that exhibit intense potassic alteration typically contain higher concentrations of bornite and molybdenite. Molybdenite is primarily concentrated along shear planes, breccia zones, and quartz veinlets and in gypsum veinlets. Secondary copper minerals (malachite-azurite-chrysocolla) are common near surface, and often occurs on fractures along with limonite and goethite.

Three phases of mineralization have been observed at the Eaglehead project:

Crudely defined sulphide species domains have been recognized in several of the mineralized zones.

Based on the work completed to the end of 2018, it appears that, in general, molybdenum concentrations increase to the southeast (i.e. the East zone contains more molybdenum, whereas the Bornite zone is characterized by a higher gold content).

A description of the host rocks, dyke activity, alteration, and mineral assemblages in the known zones of mineralization within the Eaglehead project are shown in the table below. 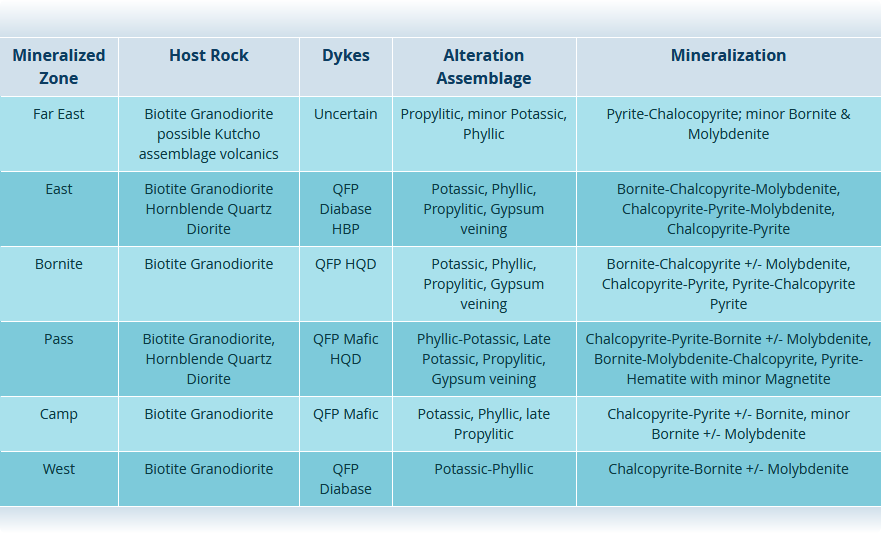